When most Delaware residents look back on their time spent learning to drive, they probably remember many different things. One such remembrance is probably the term “defensive driving,” which can be defined in several ways but which overall stresses the importance of incident avoidance. This critical concept also applies to truck drivers, perhaps even more so than to passenger car operators.

For any truck driver, avoiding a truck accident should be a top priority at all times. One overarching concept that can aid greatly in this is the approach of defensive driving. According to the Federal Motor Carrier Safety Administration, defensive driving is operating one’s truck in a manner that deliberately tries to avoid the careless or aggressive actions of others. Three main points stressed by the FMCSA include a safe following distance, alertness and keeping at a safe rate of speed.

Interestingly, a majority of the crashes that happen when drivers change lanes are due to drivers not fully realizing another vehicle is in the next lane – usually in their “blind spot,” which many drivers have to turn around to check. Both truck drivers and passenger car drivers are responsible for making sure no one is in the lane into which they are trying to merge.

For truck drivers especially, it’s critical to check their multiple blind spots each and every time they change lanes so as to not accidentally strike another car or truck. Most lane-change crashes are actually caused by lighter vehicles, so truck drivers must always be vigilant to avoid causing crashes or getting involved in one. An inattentive truck driver can easily miss the chance to utilize an evasive maneuver to get out of another vehicle’s way.

Avoiding 18-wheeler accidents is important for everyone on Delaware’s roads. Trucking accidents can instantly produce very serious injuries and even death for both truck drivers and passenger drivers. By utilizing defensive driving techniques, commercial vehicle operators can help do their part to keep Delaware’s roads safe. 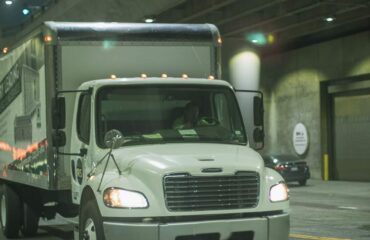